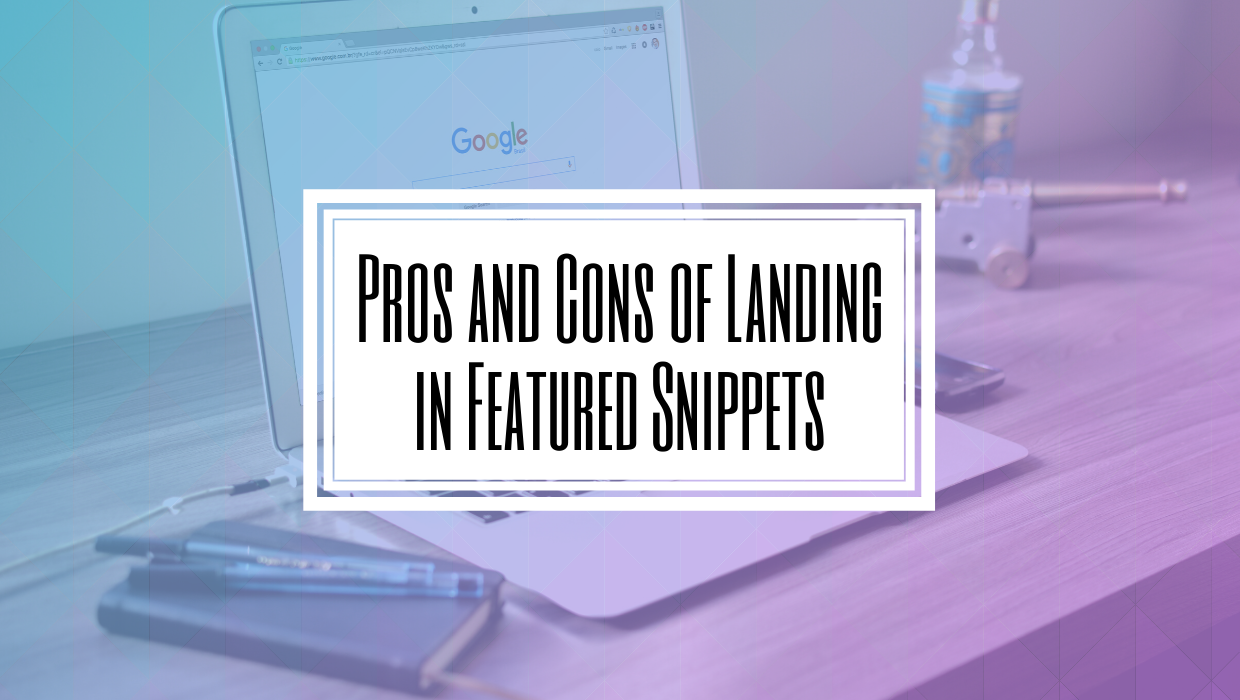 Do any simple search on Google and you’ll notice the various different elements that pop up on the SERP. From ads and organic results to knowledge panels and “people also ask”, there are a lot of features that appear on Google these days. One of the most useful elements for users is Featured Snippets or answer boxes.

Many clients strive to land in these answer boxes and tailor their SEO campaigns to do so. Landing in Google’s Featured Snippets can benefit your business, but there are some drawbacks as well. Our SEO experts break down all the advantages and disadvantages of being featured in an answer box.

What are Featured Snippets?

Featured snippets, also called answer boxes, are a highlighted search box that answers the question types in the Google search bar. It typically features a link, page title, URL, image and a select amount of text taken from the webpage either displayed as a short paragraph or list. How it works is when Google indexes your website, it will scan the content and if they feel you answer a question well, they’ll pull that chunk of text and display it as an answer box.

Now let’s look at the pros and cons of getting your website selected to be a featured snippet.

The great thing about featured snippets is that they live at the top of SERPs, which means users will be guaranteed to see your content if you land one. This will increase visibility for your brand and website since users won’t even have to scroll to see it. If increasing brand awareness and visibility is one of your top goals for an SEO campaign, trying to land a featured snippet may be worth it.

Most users will simply take whatever answer is given to them in a featured snippet. They have faith in Google that they selected an accurate answer to their question. That means if Google selects your content to be featured, users are likely to see your business as having authority and knowledge in the industry. Building brand authority is an important feature of an SEO campaign, and landing an answer box goes a long way towards building that.

Featured snippets began showing up and gaining popularity around 2015 when voice searching started to rise. Voice search has come a long way since then, and with the rise of smart home devices voice searching is becoming increasingly common. Voice assistants such as Alexa and Siri often pull their info from answer boxes, meaning if your content gets featured there, users will be getting access to it even if they’re not using a text search.

A common misconception people have is that if you land a featured snippet it will drive more people to your website. Multiple studies have actually found the opposite. Most users get all of the info they need for the answer box, meaning they won’t click the link to your website resulting in you losing out on traffic. So instead of giving you a leg up on the competition, being in a featured snippet can actually take away from traffic and conversions.

Not all queries on Google will bring up a featured snippet. In fact, only around 12.3% of searches have an answer box. That means you could spend all your time and energy tailoring your content and SEO campaign for a featured snippet that will never exist. Not all topics or content is ideal for snippets either. Snippets tend to appear more for wellness, cooking, and general questions, which don’t fit for most businesses.

The truth is that there are a lot of businesses out there competing for featured snippets. In fact, almost every single webpage indexed by Google will be competing. Even businesses that don’t make an effort to tailor their content for answer boxes can still land them. Google also typically will fill featured snippets with information from sites like Wikipedia, Wikihow, and Allrecipes.

How to Handle Featured Snippets

Landing a featured snippet is an accomplishment all businesses should be proud of; however, it shouldn’t be the main focus of an SEO campaign. Snippets can increase visibility but at the cost of website traffic and conversions. There is also intense competition for a limited number of spots, meaning you shouldn’t put all of your efforts into achieving this one thing.

Luckily, most content that is formatted and tailored for and SEO campaign can also work for a featured snippet. Businesses should simply focus on creating original, informative, and engaging content. Landing a featured snippet is an added bonus!

If you’re looking to start a digital marketing campaign or need help with SEO, contact us today!