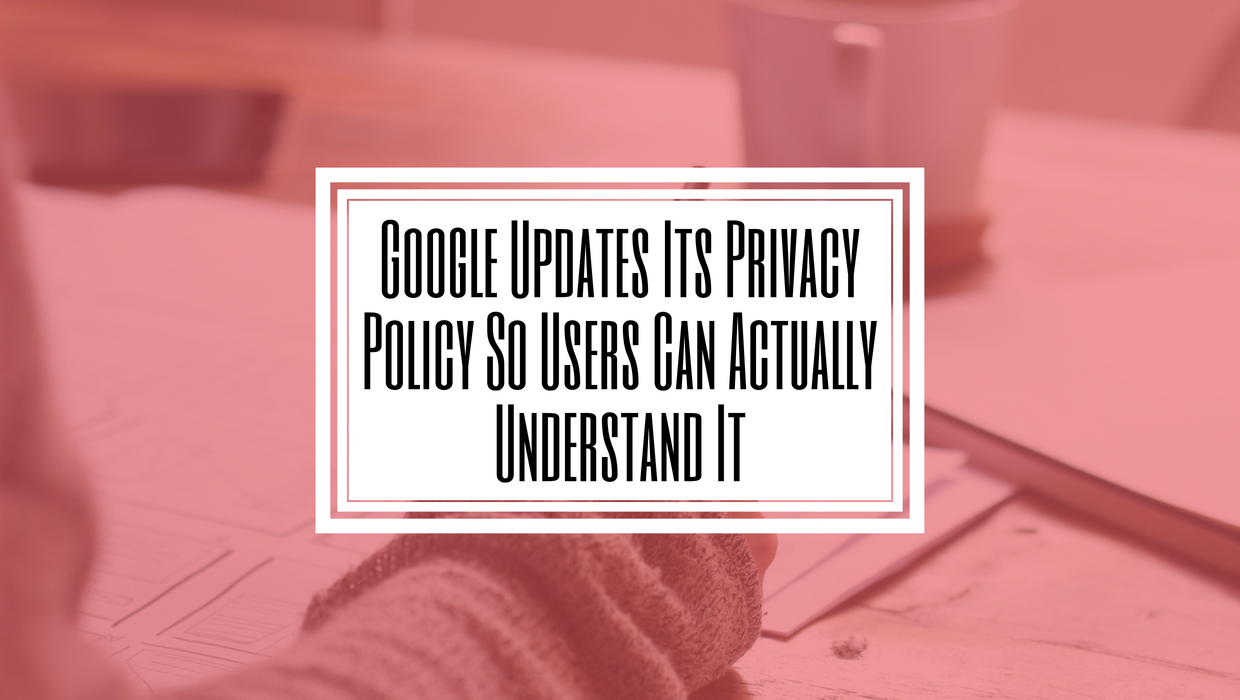 In a refreshing twist, Google has just updated its Privacy Policy and worded it in a way so that users can actually understand it. These changes aren’t just out of good faith. Google actually made these changes in an effort to comply with Europe’s new General Data Protection Regulation (GDPR).

Whatever the reason, it’s been long overdue. Tech companies have notoriously kept their privacy policies vague. When Facebook’s CEO Mark Zuckerberg testified before the US Senate, he was grilled on the lack of transparency in the tech giant’s privacy policy and terms of use document. Many senators point out that even with their background in law they were unable to understand it, so how could the average user be expected to understand what exactly they were giving up by using a platform.

It’s important to note that Google hasn’t actually changed anything about their Privacy Policy. Google stated they simply updated the wording so that it will “make it easier to understand what information we collect” and the reasons as to why they collect it.

William Malcolm, who is a legal director of privacy at Google, stated in a blog post that the company would be making multiple changes to the policy. These include improvements to navigation and organization, as well as now including visual aids like videos and illustrations to better help users understand.

We’re updating our current Privacy Policy to make it easier to understand what information we collect, and why we collect it. We’ve improved the navigation and organization of the policy to make it easier to find what you’re looking for; explained our practices in more detail and with clearer language; and added more detail about the options you have to manage, export, and delete data from our services. The policy now also includes explanatory videos and illustrations, because a visual description can be easier to understand than text alone. And we’ve made it easier to jump to your privacy settings directly from the policy, helping you make choices about your privacy.

It should be noted that nothing is changing in terms of user setting or the data Google collects on users. The company is simply becoming more transparent about what and how users data is used. It should not be surprising at all that Google isn’t changing how they operate, other than now notifying users about their actions. Google’s entire business is dependent on the data they get from users.

Following in Facebook’s footsteps, Google will now allow users to see what data the company has and will collect on them. Within “My Account” users can go to Activity Controls and select “what activity is saved”. Here users can control some things such as Location History, App Activity, YouTube Search History and other things. Users have the option of viewing and deleting history if they wish. Google is also making it easier for people to download their data.

Google hasn’t been hit with the same level of scandals as other tech giants like Twitter and Facebook have this year. Even so, they make up the other third of the “Big Three” in tech, meaning invariably they get dragged into these issues by association. Users have resigned to the fact that they must give up data in order to use these platforms. The issue has never been about that; we all know the deal we made with the Devil. Users just want to know what companies are doing with this data, why they’re collecting it, and what data specifically are they collecting. It seems a small thing to ask for in exchange for all we give them. Hopefully, in the coming years, we’ll get more transparency, and not just when regulations demand it.