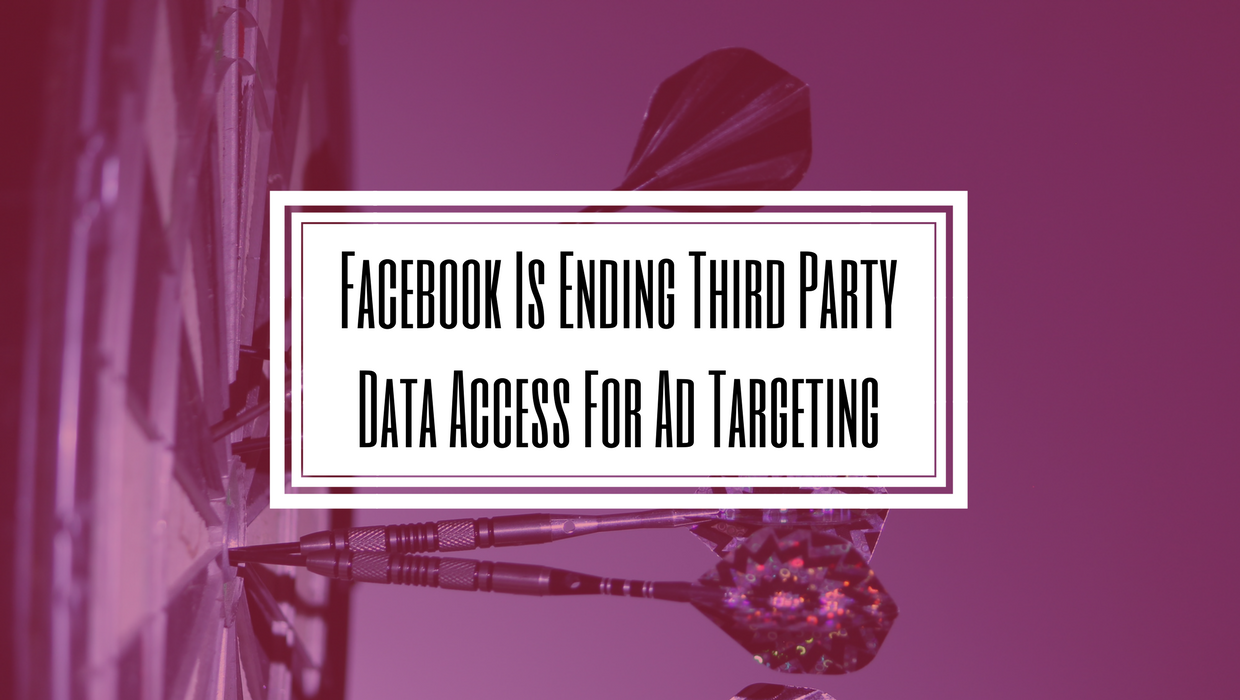 This has been a busy few weeks for Facebook, and not in a good way.

The company was hit with not one, but two data breach scandals. In the aftermath, they’ve outlined a few ways they’ll be changing, but one surprising change was that they will give up one of their most major data sources that the company uses to help advertisers target relevant audiences on the platform.

Way back in 2013, Facebook launched a feature called Partner Categories. It was a partnership between the company and major data brokers. This third part data was used to help Facebook further segment users.

Some of the data companies they partnered with included Datalogix, Epsilon, Acxiom, and BlueKai.

It’s well known (and now under intense scrutiny) that Facebook collects data from users. The data the company collects from users themselves, such as Pages they’ve liked, is only one part. It also uses information from advertisers such as if a user is a member of a loyalty program, and the data it gets from third-party providers. By combining these three sources of data, Facebook allows advertisers to more effectively target users.

This combination of data is astounding. It shouldn’t be surprising then that people who gain access to this data (looking at you Cambridge Analytica) are able to target people so well.

Removing one-third of their data source is a big move on Facebook’s part. And in a shocking twist, the company confirmed this change is permanent, not a temporary precaution.

Facebook claims to feel comfortable with the integrity of the data sourcing from its own platform and from advertisers. However, it feels a little more uncomfortable about the aggregate pools of data it gets from third-party companies.

“We want to let advertisers know that we will be shutting down Partner Categories. This product enables third party data providers to offer their targeting directly on Facebook. While this is common industry practice, we believe this step, winding down over the next six months, will help improve people’s privacy on Facebook.”

So why is Facebook ending it’s partnership now? The company has been under intense scrutiny ever since it was revealed Russia used the platform to meddle in the 2016 US elections. For many users, the two latest data breaches (they’re not technically breaches, but that’s unimportant) were simply the straw that broke the camel’s back. In other words, people always knew Facebook was collecting their data but now they finally see the consequences of allowing that to happen in an unregulated manner.

The decision to end this partnership comes fresh after the scandal that Facebook allowed a third party company, Cambridge Analytica, to obtain a vast amount of data from users, and their friends, without consent. This data was then used to help the Trump campaign effectively target users during the election, and some believe this is what caused him to win the election. Before that storm could even settle it was revealed that Facebook also collected information from call and text logs from Android users.

Whether or not Cambridge Analytica’s access to this data helped Trump win or not may never be confirmed. What we do know though is that users have been abandoning Facebook (#deletefacebook was trending for days) and are now finally demanding change.

While one could look at this ending of the partnership with third party data companies as a goodwill step, that’s not the full picture. This change is coming ahead of the GDPR regulations and the ePrivacy Directive that are coming into effect in Europe. These regulations would have forced Facebook to change if they wanted to continue to operate in Europe and the company was already working towards these changes before the Cambridge Analytica scandal.

This isn’t the end of Facebook’s relationship with these companies either. Facebook clarified they will still work with companies like Experian and Acxiom to measure ad performance and provide metrics. It did state they would review these relationships though.

To sum it up, Facebook is in the middle of a reckoning. This is the point of change. Users are tired of giving up more and more data and receiving only trolls, abuse, and manipulation in return. While this step looks like Facebook is going in the right direction, it’s not nearly enough. Now we wait and see what Facebook will really do to make it up to users, and what will happen if they don’t.