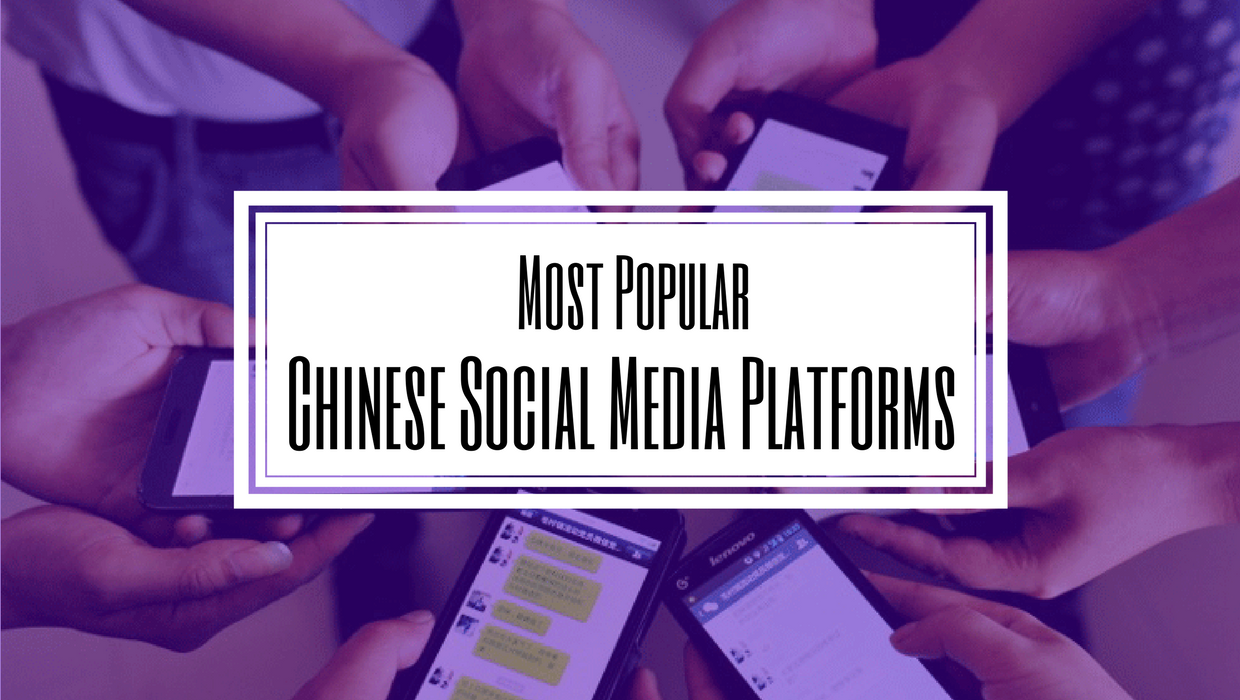 Most companies finally realize the power and necessity of social media marketing these days. It’s taken awhile to get here, but now it’s laughable to see a company try to make it without any social media presence. Users spent over a third of all time on the Internet on social media sites and this number is constantly growing.

But this poses an issue for companies, both big and small, trying to reach consumers in China. Major social media platforms like Twitter and Facebook are blocked unless users use a VPN.

China has developed its own list of popular social media sites that brands should know about. Here are the most popular ones today, and everything you need to know about them.

WeChat is China’s all in one social media app. If there were one place a brand should focus their efforts it’s here. This social media platform has everything, and we mean everything. Games, online shopping, financial services, instant messaging, groups etc. You name it chances are WeChat has it or will have it soon.

Users in China can get almost everything they need from a single app so they rarely have a reason to leave it. If you’re trying to reach the Chinese consumer this is where to do it.

Like Facebook, there are personal and business accounts. Businesses can create official accounts to post updates, announce promotions, or communicate with customers. WeChat also allows for one-to-one personalized interactions between brands and users. There are also opportunities for advertising, so WeChat really does offer the most.

Sina Weibo, often shortened to just Weibo, is a micro-blogging platform that is most commonly compared to Twitter. On Weibo, users can upload videos, images, and gifs. They can also read, like, and share posts.

Weibo currently has over 340 million active users. It’s extremely popular in the urban cities of China and a large population of it is made up of young, white-collar workers, which is usually the target demographic for brands.

Like Twitter, Weibo is the place for trending topics and news. Chinese celebrities, companies, and organizations all utilize it to interact with their followers. It also has a special feature that Twitter does not. Brands can directly market and sell their products on the platform.

QQ is an instant messaging app. Like WeChat it offers users games, music, shopping, micro-blogging, movies, group chats, and other features. Unlike other social media platforms that are heavily driven by mobile use, QQ has a strong desktop usage. White-collar workers are especially using the desktop version.

A huge bonus of QQ to is that a phone number isn’t required for registering like it is for WeChat. Many Chinese social media sites require a Chinese phone number, which in China are linked to their identity numbers, making it hard for Western brands to get on the platform. QQ’s ease of registering is a huge plus.

Youku is the top video-sharing app in China, equivalent to Youtube. Unlike Youtube though, Youku contains more professional content rather than user-generated content. Youku is a popular site for streaming or downloading movies and TV shows.

This platform has over 580 million active users, and for that fact alone it’s worth your time. Youku offers online viewing analytics tools, unlike some of the other Chinese social media platforms. This enabled brands to identify who their audience is. There are also advertising possibility on the site so it’s something brand should consider.

Zhihu is the Quora of China. It has a highly engaged user base, with posts getting tens of thousands of comments and votes. It’s common for posts to be over 5,000 words and include pictures, graphics, charts, and other media to answer questions.

Unlike Quora, Zhihu has many extra features. Users can tip the authors of answers they like. They recently also added Zhihu Live, which is its best feature. Top Zhihuers are invited to prepare TedTalk like lectures.

Zhihu’s users base is also ideal for brands. They’re usually highly educated, wealthier than normal, and live in the most popular urban cities like Beijing and Shanghai. The common Zhihu users are also very attracted to international brands, making this the perfect platform for Western brands to leave a mark.

Meipai is the most popular video messaging app in China. Users are allowed to create 60-second videos, import photos, add effects, and share videos on WeChat and Weibo. Think of it like Instagram with only videos.

Meipai has great advertising possibility for brands. Its 30 million monthly active users are also nice. The most popular feature on the site is its live-streaming feature. Local celebrities are constantly using it. A lot of local brands are already trying to team up with popular celebrities, which Western companies could do too.

China may have its own package of social media platforms, but besides the language difference, many of them are very similar to the ones companies are already comfortable with. It may take some time to learn what content performs the best, and having a native Chinese speaker on hand is recommended, but with a little practice, companies have huge potential to reach Chinese consumers.

If you want to learn more about Baidu SEO or social media management in China please contact us.