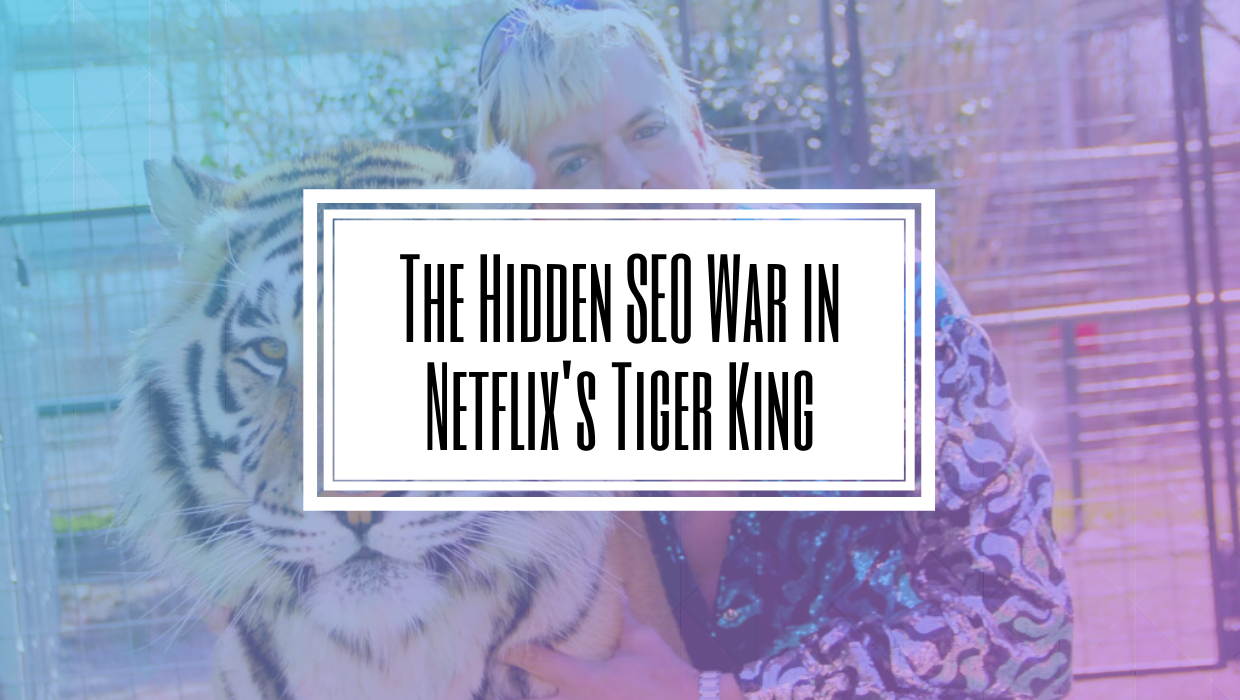 It’s been over two months since Netflix released its docuseries Tiger King: Murder, Mayhem, and Madness. This indescribable show dominated the cultural conversation for weeks. It’s prime quarantine content- grippingly entertaining yet leaves you with a lasting uneasiness that keeps your mind focused on anything but the on-going global pandemic. If you haven’t seen it yet it’s hard to understand what’s so captivating about it.

To sum it up, the docuseries follows Joe Exotic, a gay, polyamorous, redneck, wannabe country music star that operates a big cat zoo in the U.S. The series primarily focuses on Joe Exotic’s long-standing feud with Carol Baskin and the impact it has throughout the whole big cat community.

At this point, you may be wondering what a show about exotic animals and murder plots have to do with Search Engine Optimization (SEO). Amongst the craziness that the show covers it touches briefly on a fiery SEO war between Exotic and Baskin.

Although far from his worst crime, Exotic’s crude blackhat SEO tactics are what ultimately send him down a path of trouble.

The feud between Joe Exotic and Carol Baskin is at the heart of Tiger King. The hatred that connects these two is fascinating to watch play out. Exotic, who owned G.W. Zoo, a big cat zoo in Oklahoma, found himself targeted by Baskin, who owns an ‘animal sanctuary’ called Big Cat Rescue in Florida.

The rivalry between the two had a digital component to it from the beginning. Exotic at the time was traveling around the country putting on mall shows featuring magic and baby tigers.

Baskin quickly caught wind and began a rigorous phone and email campaign to shut him down. She was successful, but it only painted a target on her back. Exotic quickly began focusing on her almost exclusively on his online web show.

Then SEO entered the picture.

Baskin’s biggest asset was her online presence. She was fortunate enough to start at the rise of SEO and social media, securing her place in search engines and online communities early on.

“She’s the first choice every time — supersedes all the zoos; she’s at the top of all search,” said Bhagavan “Doc” Antle, founder of Myrtle Beach Safari and a recurring character on the Netflix series, regarding Baskin’s Big Cat Rescue.

Hoping to undermine and cash in on Big Cat Rescue’s online success Exotic began a series of shady blackhat techniques. “Joe started realizing that if he made his name close to Big Cat Rescue, when they Google it, it might pull him up first,” said John Reinke, former manager of the G.W. Zoo.

Exotic thus began adopting the moniker “Big Cat Rescue Entertainment”. He was successful. Online traffic began funneling away from Baskin. Exotic didn’t stop there though. He also created business cards and ads featuring a Florida address and phone number, even though G.W. Zoo was located in Oklahoma. If the shady SEO tactics weren’t enough, Exotic also made the bold (and ultimately foolish) choice to copy Big Cat Rescue’s logo and other branding material.

Joe Exotic’s success was short-lived and was ultimately what led to his downfall.

The Downfall of the Tiger King

Like most blackhat SEO campaigns, Exotic was initially successful. Baskin admitted to fielding calls from people assuming she was a part of Exotic’s business. People online were probably similarly fooled.

The success didn’t last though. In 2012, Baskin took Exotic to court for copyright violation. She was successful, being awarded a settlement close to $1 million.

The lawsuit was the beginning of Joe Exotic’s downfall, both financially and mentally. Baskin ruthlessly went after Exotic’s parents’ home as well as tried to stop him from selling tiger cubs- his primary source of income. Feeling trapped, Exotic sold ownership of his zoo and eventually sought a hitman to stop Baskin for good.

While Tiger King only briefly touched on the SEO battle between Exotic and Baskin, it had lasting consequences that were played out throughout the series. The SEO aftermath didn’t end there though.

Jeff Lowe, who Exotic turned over his zoo to for legal reasons, is now the owner and operator of G.W. Zoo. After Joe Exotic was convicted he outlined plans to expand and rebrand the zoo as the Greater Wynnewood Exotic Animal Park.

However, in a not so shocking turn of events, Lowe recently reopened the zoo up under a new name: Tiger King Park.

Lowe’s rebranding under this new name is not surprising. The Tiger King docuseries is one of Netflix’s most successful releases to date. The zoo can now not only capitalize on that fame, but they can also coast on the online presence the series has created.

Who would have thought a true-crime show would have an SEO lesson buried in it. There are many takeaways from Tiger King, but for our industry and those looking to undergo a digital marketing campaign they should focus on the consequences unethical shortcuts can create.

Blackhat SEO tactics are incredibly tempting. A good SEO campaign takes time and money. Quick results for cheap can be tantalizing for companies. It’s important for everyone to understand that the short-term benefits almost never outweigh the long-term consequences.

Google algorithms are now smarter than they were during the Exotic-Baskin’s feud era. The search engine will now hand down steep penalties and even bans. It’s possible to even face legal ramifications like Exotic.

The bottom line and ultimate SEO lesson to take away from Tiger King is that blackhat SEO is never worth it in the end. Good SEO takes time and hard work.