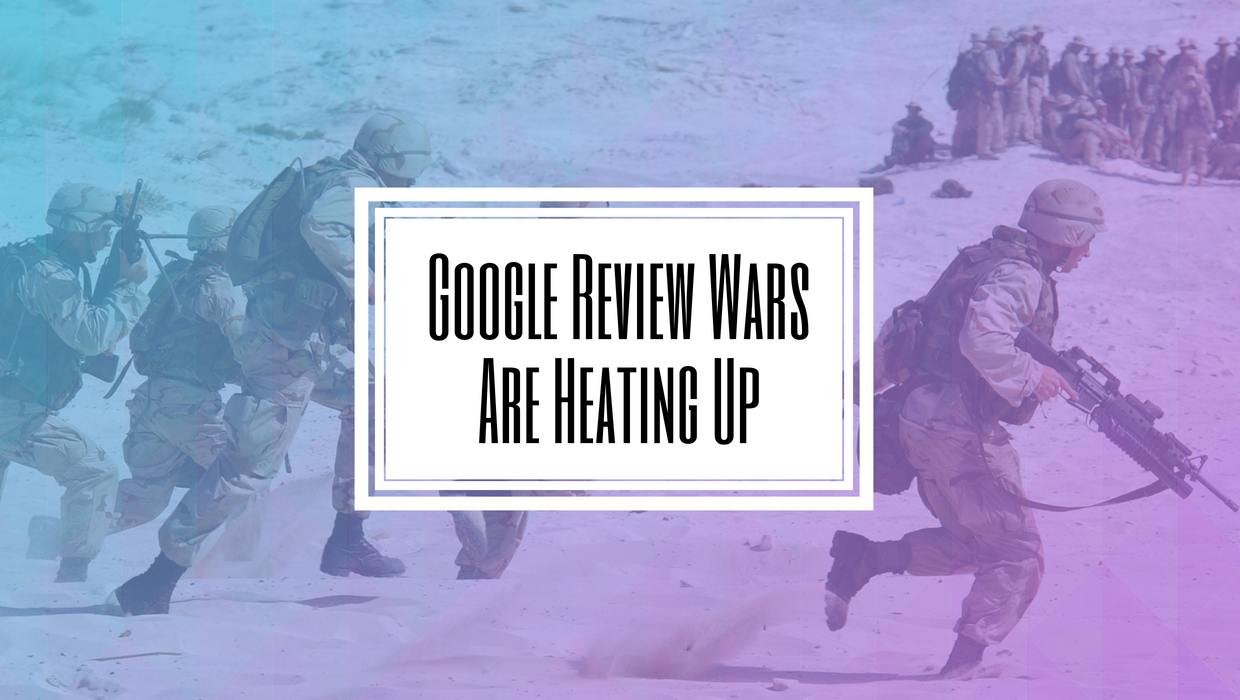 A business’ online reputation is vital these days, and with more users turning to online reviews before making decisions it’s not surprising that some people have found themselves caught up in review wars. Fake reviews aimed to discredit a competitors’ business isn’t a new tactic, but there is a new surge of it happening. And the battleground it mainly on Google My Business Reviews

It’s not an exaggeration to say a business can live or die by the quality and quantity of their online reviews. Reviews are quickly outweighing personal recommendations when it comes to making trusted decisions, and if a customer is comparing two businesses reviews are usually the major deciding factor.

But not everyone plays fairly. There are a growing number of businesses that have taken to black hat SEO practices, flooding their competitor’s Google reviews with fake negative ones. What’s even more concerning is that Google, despite all their power, doesn’t seem to care.

Review wars can be serious, and this is how you stop them.

Online reviews, especially Google Reviews, also have an impact on SEO. Although Google has never confirmed it, it’s been shown that the quantity of reviews does impact search result rankings. Although Google doesn’t take into account the star average when ranking businesses, getting flooded with negative reviews could push a business to the top where these false reviews get highlighted, which is even worse.

It’s too easy to leave a fake review on Google. Fake reviews are actually the issue SEO experts want Google to fix most. Although Google finally removed the ability to leave anonymous reviews, setting up a fake Google account in order to leave one is just as easy. Competitors often create dozens of fake accounts, leaving negative reviews ranging from lengthy essays explaining a horrible fake situation or simply leaving a one-star review.

How to Win the War

Businesses at the receiving end of these fake reviews often feel desperate and alone. Google does have a flagging system, AI, and machine learning but they are notoriously slow at removing fake reviews. Unlike Yelp, they don’t have review screening, don’t detect spam reviews on their own, and are slow to respond when alerted. They still allow reviews with no content, can’t detect review networks, and don’t even perceive fake reviews as a problem. Faced with this, it often leaves businesses feeling like their only option is to fight back just as dirty- but that’s a mistake, one that won’t end well.

Instead, this is how you win the review wars:

1.  Respond to each review in a polite and professional manner

Point out that you have no record of them being a customer, request more info, and offer to help. By taking the high road you show potential new customers reading the review that not only do you have good customer service but that these reviews are also fake.

Google has a reporting feature. Simply click the little flag on the right. You’ll be asked to input an email address and select why you’re flagging the review. It might take a few days for them to review and take it down, and you may even have to report it a few more times. There is no guarantee Google will take it down, but at least you’ve brought it to their attention.

3. Encourage your customer’s to leave reviews

When you send out an invoice, ring a customer up, or run into them again, mention that it would be great if they could leave a Google review. Most people simply forget to do this, so a gentle reminder is great. Don’t provide incentives or ask for fake positive reviews from non-customers though. This goes against Google’s guidelines and could land you in trouble.

Social media has power these days. Reach out to Google on Twitter or Facebook, pointing out your problem. When called out on a public platform they’re more likely to respond and take action.

As frustrating as it is to be caught up in a war over fake reviews, remember to take a deep breath. Consumers are getting savvier every day about fake news. The good news too is that users are now skeptical about businesses that have all 5-star reviews. It’s unrealistic to think that every single customer a business has had has been completely satisfied. A few negative reviews provide more legitimacy. Studies have shown that 4.2-4.5 is actually the ideal average star rating for purchase probability so don’t sweat a few spam ones.

Wars get dirty, but once the fighting is all done you’ll be grateful that your hands are clean. Blackhat SEO tricks like fake reviews might provide short-term benefits, but in the long run, they’re detrimental to a business. If you have SEO questions or want our help in fighting fake reviews feel free to contact us.