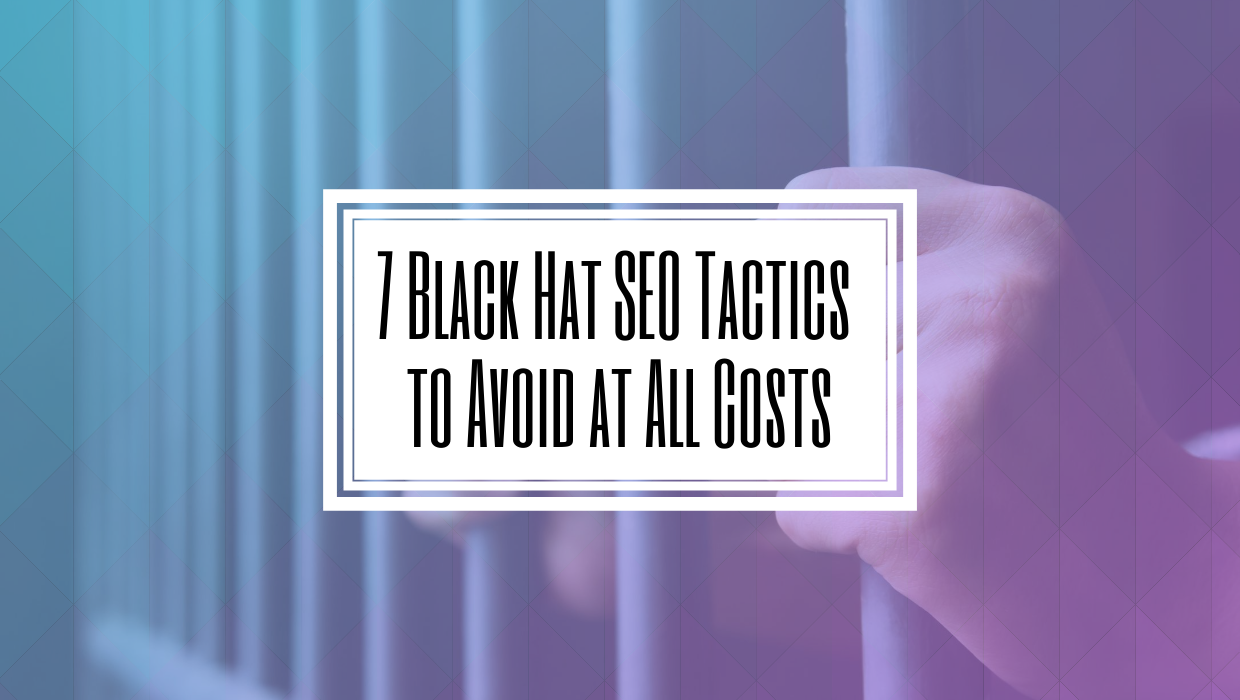 It’s not uncommon for a new client to come to our SEO agency full of skepticism and apprehension. More often than not they’ve been burned by a shady SEO company before. Cheap or sketchy SEO businesses typically use black hat SEO tactics to increase rankings. While these might work initially, they usually result in costly and long-lasting consequences.

Here are a few black hat SEO tactics that you should avoid at all costs and should never let your SEO agency do.

Link building is an important part of SEO, but it’s also one of the most challenging parts. Finding quality links that are relevant can be difficult. The white hat way of building links is to create quality content, link internally, guest blog, and research professional places to link to. Rather than put in all this work, black hat SEO companies will often simply buy backlinks. This goes directly against Google’s rules and can result in a ban. Not to mention most of these links are spammy or irrelevant and can result in your site being penalized.

As the name suggests, duplicate content is when sites essentially copy and paste content multiple places on the site. This tactic is meant to make content creation easier for lazy companies. However, search engines prefer original content. Google will either ignore the duplicate content at best or penalize the site at worst. Duplicate content also can result in a poor user experience, which will also negatively impact rankings.

Wondering what cloaking is? It’s one of the shadiest black hat SEO tactics. It’s when the content or URL presented to the search engine is different than what is presented to the user. It’s done by delivering content based on IP addresses. It essentially ticks search engines into ranking them higher for target keywords, while showing users something completely different. It’s a major violation of Google Webmaster Guidelines and can result in heft penalties. Any SEO agency that uses this tactic should be avoided.

Keyword stuffing used to be one of the most well-known black hat SEO techniques. Thankfully, search engines are too smart for it these days, but many bad SEO agencies still try it. Keyword stuffing is when you overuse the same keywords throughout a piece of content in an attempt to maximize visibility and bring traffic. Keyword stuffed content doesn’t look natural and isn’t user friendly, so you’ll notice rankings will be impacted.

Invisible text is a tactic that sounds smart but fails in practice. It involves putting a list of keywords on a page and masking them by using the same color text as the background. That way the keywords are invisible to users but are still read by search engine bots. Thankfully this technique doesn’t really work these days. That doesn’t stop shady SEO people from trying it.

Google is the top dog when it comes to SEO. One of the best ways to increase rankings is to make the most of their Google My Business platform to increase local SEO rankings. Unfortunately, Google isn’t so great at policing their platform, resulting in an increase in local SEO spam. Black hat SEO agencies try to abuse GMB in serval ways, from keyword stuffing listing names, creating fake or duplicate listings, and leaving fake reviews. It can be tempting to use these tactics to get head, but Google has started to get better at enforcing their guidelines and will even ban businesses that try them.

Negative SEO is a relatively new term used to describe black hat tactics that aren’t just focused on getting a client to rank higher, but actually target competitors with bad SEO. This could mean linking a competitor’s website to shady backlinks, flooding their comment section with spam, leaving fake bad reviews, or changing their GMB listing name. This is one of the worst black hat SEO tactics that can not only damage your business’ rankings but can also reflect poorly on your entire business if found out.

Interested in getting your business ranking using white hat SEO techniques instead of resorting to black hat ones? Contact us today! Our SEO agency is one of the best in Toronto.