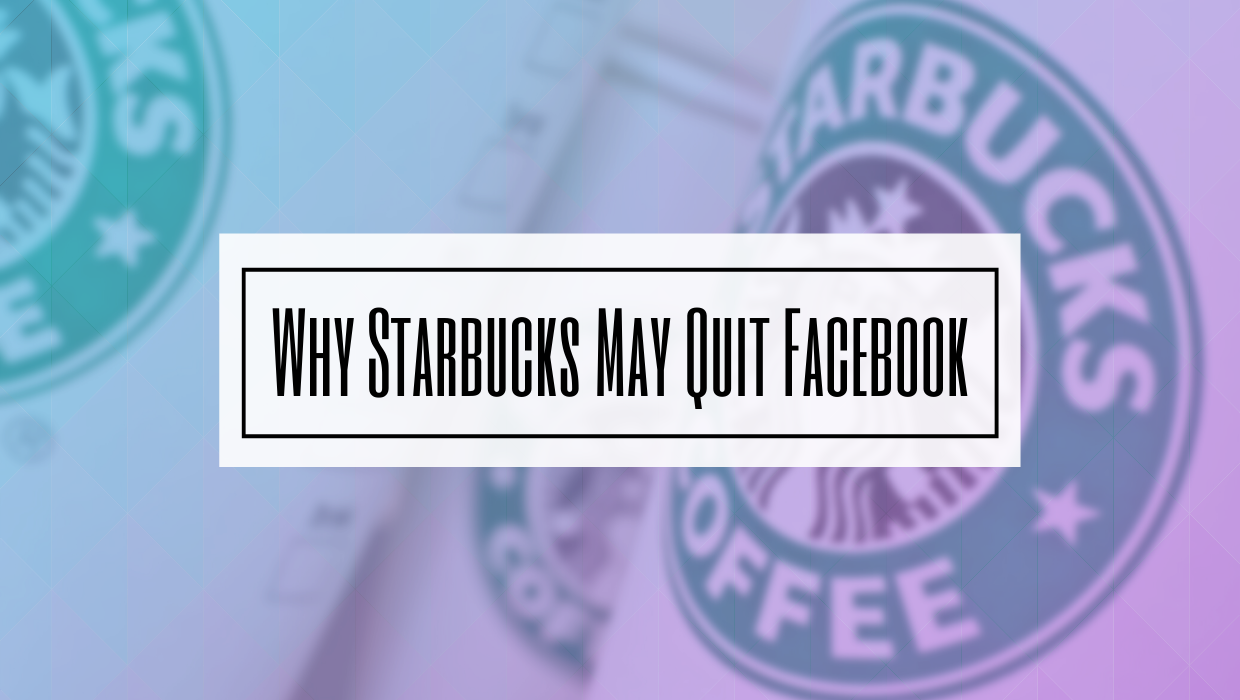 Facebook has been facing an exodus of users in recent years. Despite still being the largest social media platform, Facebook has been struggling to attract new users and retain the younger generation. Despite this, major brands have still stuck around. Brands still pour millions of dollars in ads on Facebook and invest time in keeping their brand profiles updated with fresh content. Now that all might change.

In recent weeks, it’s come out that Starbucks is seriously considering quitting Facebook. So why is one of the most prevalent brands ready to leave this social media platform behind and what does it mean for the future?

Why Starbucks is Ready to Leave

Starbucks takes pride in being a socially conscious brand. From supporting the LGBTQ community to speaking out against racism, this company is one of the few that continually makes social stands all year round, and not just when something topical happens. Unfortunately, their Facebook base isn’t a fan.

It’s not a mystery as to why Starbucks is ready to leave Facebook. Simply go to their page and read the comments of one of their posts about racial or social justice issues. You’ll be hit with thousands of hateful comments ranging from downright racists to simply untrue.

Starbucks has been vocal about its displeasure with this for years. Their social media team has been struggling to moderate comments, not helped by Facebook’s algorithm which seems to amplify these hateful comments. Toss in the platform’s slow response time and unwillingness to let the brand disable comments and it’s understandable why Starbucks is ready to leave.

“Starbucks is in the process of evaluating their organic presence on FB, and whether they should continue to have a presence on the platform at all,” a Facebook employee wrote to their colleagues. “Anytime they post (organically) in regards to social issues or their mission & values work (e.g. BLM, LGBTQ, sustainability/climate change, etc.) they are overwhelmed by negative/insensitive, hate speech related comments on their posts.”

If Starbucks were to leave, they’d be one of the first major brands to do so.

Starbucks isn’t alone in its criticism of Facebook. The platform has been under the microscope for years. First for a series of data and privacy breaches, but lately due to the reconning of the hate and misinformation that continued to spread on the platform. While other social media platforms like Twitter have taken steps to stop the spread of misinformation, Facebook has been firm that it won’t step in.

Should Starbucks remove their page, it would be one of the largest companies to do so, but not the first. Elon Musk removed the Tesla and SpaceX Facebook pages back in 2018 as part of the #DeleteFacebook campaign, and they remain gone to this day though they do have active Instagram profiles.

Last year hundreds of companies, including Starbucks, stopped advertising on Facebook as part of the “Stop Hate for Profit” campaign, which was meant to pressure the social network giant into taking a harder stance on racist and hateful content. The campaign was successful in the short term, but Facebook still recorded $86 billion in revenue in 2020.

What it Means for Facebook’s Future

Despite Facebook reassuring Starbucks and other brands that they’re taking steps to moderate hate on the platform, Starbucks is nearing its breaking point. And as Facebook’s engagement and influence lessen every year, brands will have less reason to put up with the toxicity.

If a huge brand like Starbucks, which spent more than $258 million in advertising globally last year, leaves Facebook, others are likely to follow. Companies realize they can get just as much bang for their advertising buck, without the hate, on other platforms.

Unfortunately, it would probably take multiple brands of Starbucks’s size and power leaving before Facebook makes any major changes. Until Facebook is accountable to a set of rules and standards, Facebook likely won’t change Facebook.