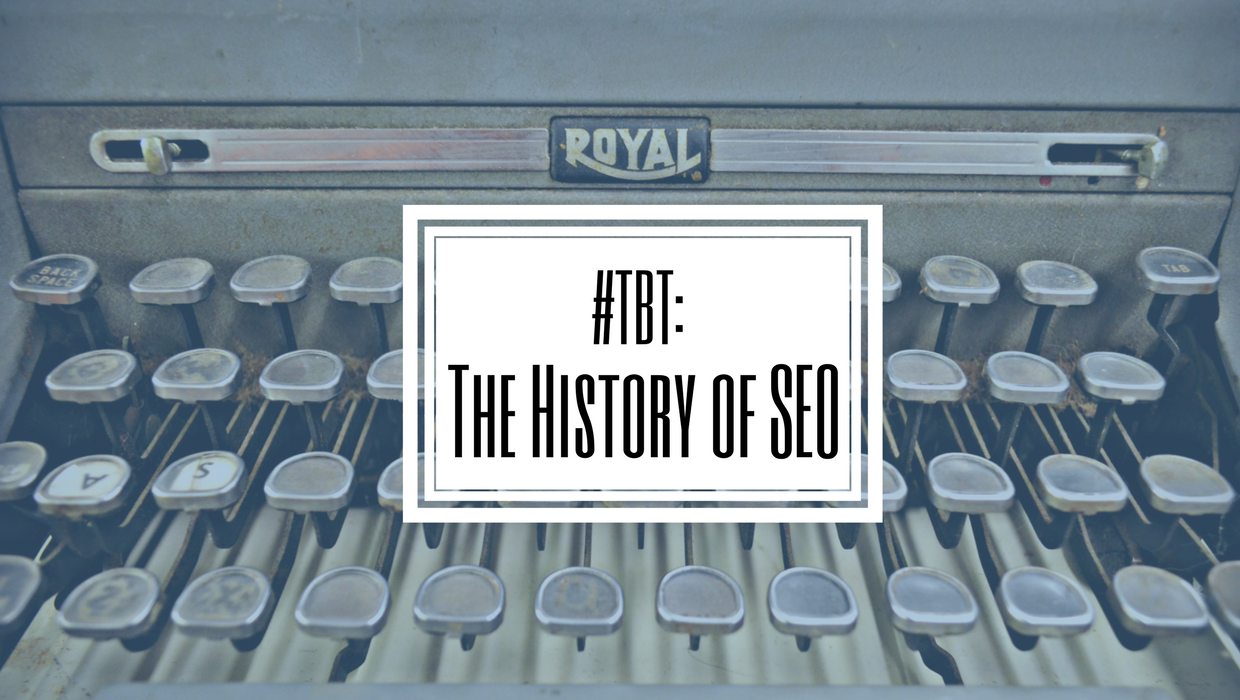 Tracing the history of anything is difficult. The exact origin is usually heavily debated. Do you count the first attempt or the first success? What happens when it gets multiple name changes? These are the types of questions that make the origin stories of things so hard.

SEO, search engine optimization, is no different. Technology is like a family tree, all interwoven with one another.

SEO is the child of Search Engines and the grandchild of the Internet.

Today, in our rapidly changing digital age, it’s hard, nearly impossible in fact, to get by without doing some form of SEO. So join us as we step back in time as we explore the birth of SEO (which is quite appropriately a millennial born in the 90’s).

To really understand the history of SEO, we have to take a look at the whole family tree.

There would be no SEO without the Internet. Unlike a war story told by your own grandfather, we’ll keep this part brief.

The history of the Internet, of course, begins with the development of electronic computers in the 1950’s. They communicated through packet networking, the primitive form of Internet.

It wasn’t until the 1980’s that computer scientist Time Berners-Lee created the World Wide Web. By the 90’s the Web (as it was coolly referred to then) had become a revolutionary influence on culture, commerce, communication, and technology.

And in 1990 the Internet gave birth to Search Engines.

Search engines are essentially just digital archives of common information. The idea for one first came way back in 1945. Dr. Vannevar Bush, director of Office of Scientific Research and Development, proposed a “collection of data and observations, the extraction of parallel material from the existing records, and the final insertion of new material into the general body of the common record”. That was Bush’s fancy old-timey way of saying he wanted a place for new and old information to be stored and accessed by people.

It wasn’t until 1990 that this happened though. McGill University student (another thing the world can thank Canada for) Alan Emtage created Archie, the first search engine, but this is debated.

Fun Fact: Google was first used as a verb on television in Buffy The Vampire Slayer. Googling has since become synonymous with the word searching.

As search engines became more widely used, an issue arose. How would they be ranked, or shown when users searched? Site owners started to get smart; they realized with a few simple actions SERP could be manipulated.

Search engines started to become household names. The AskJeeves Butler was huge, Googling became a verb, and Yahoo was at the top of its game. Getting information and becoming connected was becoming easier than ever.

The only problem was the quality of information.

Search engines only matched words from queries leading to site owners to keyword stuff their websites. They would use the same keywords over again because using more keywords would lead to them ranking higher for those keywords thus resulting in higher traffic thanks to those keywords (see how awful that was to read?).

In addition to the keyword aspect of SEO, back linking was also discovered. Back then; these links were excessively spammy though. By time search engine algorithms were changed and fixed, black hat SEO practices were already in full swing and weren’t fixed by these new changes.

SEO at this stage was the typical 90’s bro, with frosted tips and a puka shell necklace.

And then Google happened.

It’s worth noting that SEO is actually older than this search engine giant.

When Sergey Brin and Lawrence Page set out to create Google, they set out to solve this problem. In a paper they wrote, they first mentioned PageRank, the technology they still use today to rank search results based on quality.

Then in 2003 SEO was finally forced to grow up. Google changed their algorithm in the “Florida” update. This was the first instance of sites receiving penalties for keyword stuffing.

In 2005, SEO was forced to grow up some more. Google united with Yahoo and MSN to work together to decrease the amount of spammy links and comments on websites. Not long after Google debuted personalized searches, using a person’s individual searching and browsing history to make results more relevant. Then in November, Google Analytics launched, which is still used today, to measure traffic and ROI.

Then in 2009, Bing premiered. This search engine used a different algorithm than Google, favoring keywords in URLs and pages from larger sites. But it was really Google’s Caffeine algorithm change that shook up SEO. Now real-time searching was possible. Google included things like breaking news and tweets.

This was arguably when SEO graduated from being a website-only tool. Now SEO was important to everyone. Everything, from the core website to an employee’s social media accounts, had to be optimized.

In 2010 the user became more important than ever to SEO. Reviews now had an impact on page ranking. Social media also saw a growing importance. These “social signals” such as Facebook posts and Twitter feeds were linked to PageRank.

Over last few years Search Engines have continued to try to parent and raise SEO the right way. They cracked down on spammy links, content farms, and algorithm scams.

Search engines further molded and shaped SEO with their local and mobile changes. Search results became localized for individuals requiring SEO to start optimizing for those locations too. As more users went mobile, having a mobile optimized became an increasingly important aspect of SEO.

It’s safe to say that search engines will continue to parent and shape SEO practices. This can be frustrating for SEO practitioners. It’s like a parent nagging you to study. You know you should, you know it’s the right thing, but cheating on that test is just so tempting at times.

It makes sense that this parent-child relationship will hold for awhile though. SEO is still so new. It didn’t come long after search engines, yet it seems far less developed.

The future of SEO is unclear. It will stay- it has to. It’s how websites and brands get seen in the digital world.

Right now the future is mobile, social, local, and voice searching. Users are becoming more important than ever before.

As search engine algorithms become more advanced SEO will have to shape up and follow the rules. We’re now in the era where doing things the wrong way is almost more difficult than just playing by the rules.

When you look at the history of SEO, it becomes easy to see why companies always say SEO is a long-term commitment. It’s a constantly changing field.

For us in the SEO industry, we look at it like proud parents. Watching this field develop from a shady teenager to an ethical adult has been hard, yet rewarding work.

SEO will continue to grow and change- its story doesn’t end here.

If you want to learn more contact us for a proposal to see how SEO can benefit your business.

Free Download: Get the complete guide to essential tools for a successful content marketing strategy as a free, downloadable PDF to save it for later or keep around as a resource.