In the wake of the Russian meddling in the 2016 US election, there has been a wave of changes for the Big Tech Three- Facebook, Twitter, and Google. Transparency, authenticity, and quality have now become the focus. Facebook has been quite open about how they have been testing multiple ways in which to flag, label, and combat the sharing of fake news stories.

But now it seems they’re taking an even bigger stand. These small changes were never going to cut it, and Facebook has finally accepted that. On Thursday, Mark Zuckerberg announced Facebook would be introducing major changes to its News Feed. Here’s what’s going to change and how these changes will matter to brands, social media managers, and content creators.

Facebook will change its News Feed so that content that sparks meaningful conversation between friends will be prioritized. This means users can expect to see more content from people they are friends with on Facebook. Content from businesses, brands, and media will now be deprioritized. Facebook has already made changes to cut back on brands and posts that beg for engagement, but these new rounds of changes are expected to hurt publishers even harder.

The reasons behind the changes go beyond simply stopping the rushing flow of fake news. Facebook’s CEO and founder, Zuckerberg said these changes are aimed to ensure the time spent on Facebook is good for people’s wellbeing. In recent years multiple studies have come out that said it’s not social media use itself that’s bad, it’s how people use it. Engaging with content, especially content from family and friends, promotes better mental health and overall well-being, while passive scrolling and reading have been shown to have negative effects on people. 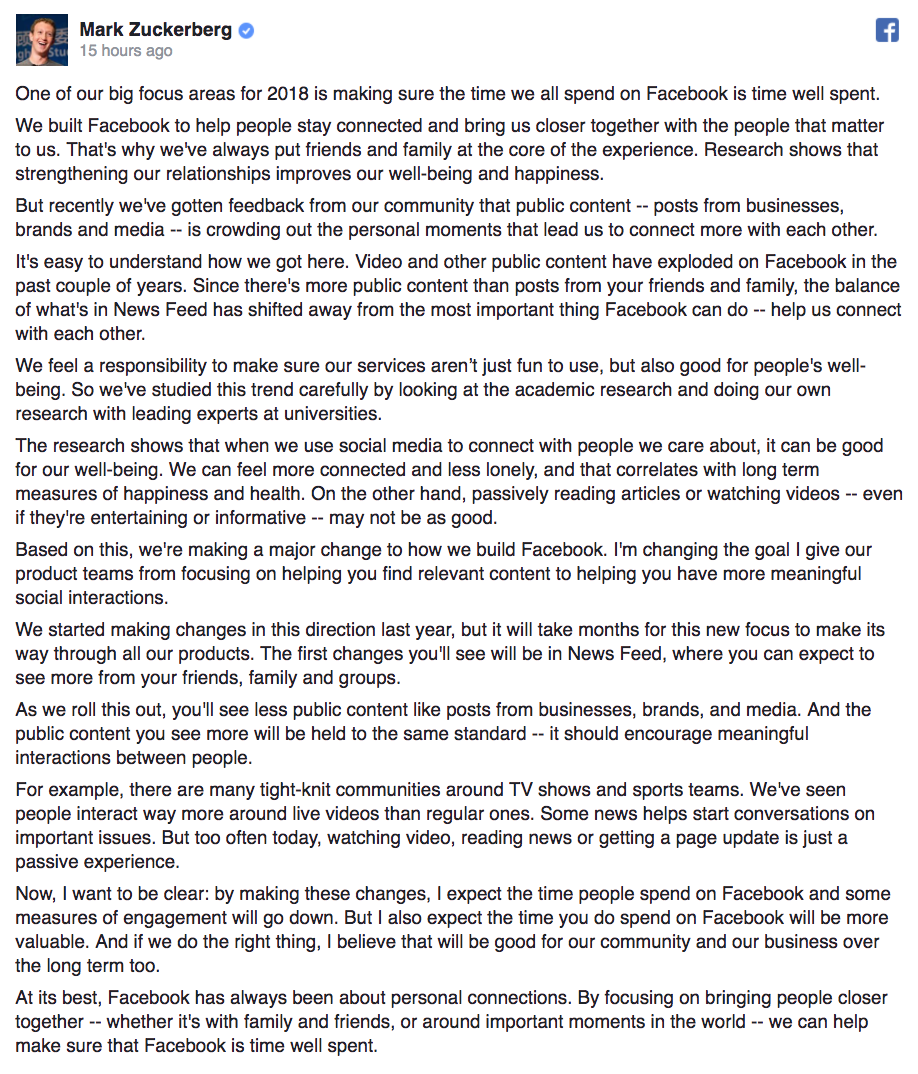 Right now it appears as if these changes will hurt everyone- Facebook included- except for users. For brands and publishers, and the content creators and social media managers that run these Facebook accounts, these changes could have huge impacts.

Here are a few ways things will change:

Sharing posts have long been the way to get posts spread and prioritized. It makes sense- the more people share a post, the more viral it goes. But with these new changes, it will be comments that will be king. This new update will prioritize posts in the News Feed that get people talking to each other in the comments. In a December 2017 blog post, Facebook stated that “In general, when people spend a lot of time passively consuming information — reading but not interacting with people — they report feeling worse afterward.” From this standpoint, it makes sense that Facebook would push brands to create content that gets engagements over passive views.

Facebook struggled in their early years trying to create a reliable and useful advertising platform. After it figured it out it pushed it hard on brands. Big brands have spent millions buying ad space and sponsored posts for easy to reach audiences. While it’s still not entirely clear how Facebook will handle how these new changes will impact advertisers, we can expect them to be angry. These changes are pretty clearly saying that Facebook is advertising users over advertisers now.

Publishers are also going to experience their fair share of frustration and pain. Facebook has pushed publishers to spend money not only on sponsored posts and ads but also on time and resources to build audiences on its platform. Ironically, many of these publishers are the ones responsible for reporting and exposing the flaws Facebook is now trying to fix.

In some ways, these changes are taking Facebook back to its roots. In the early years, Facebook thrived because it provided a platform for connecting with family and friends.

Facebook can’t be faulted for focusing on wooing brands and publishers for the past few years. The site had to monetize in order to survive. But in the end, Facebook didn’t get what it wanted or needed out of this. As professional content flooded people’s News Feed, it changed how people interacted with the site. Why would you want to post a personal picture only for it to appear next to a professional model? Why would you want to post a family recipe only to have it hidden beneath a Tasty video?

Making Facebook a platform for professionals to advertise and target audiences took away the foundational use of the site. It took away the intimate and personal feel. Not to mention the professional content that flooded the site just made people feel bad.

These changes will be painful when initially implemented. Users and brands alike will voice their displeasure. But we should be applauding Facebook for taking a strong stand. It’s not often that a big tech company prioritized users over advertisers, especially when it means taking a hit themselves. Facebook is simply trying to put the “social” back in social media.