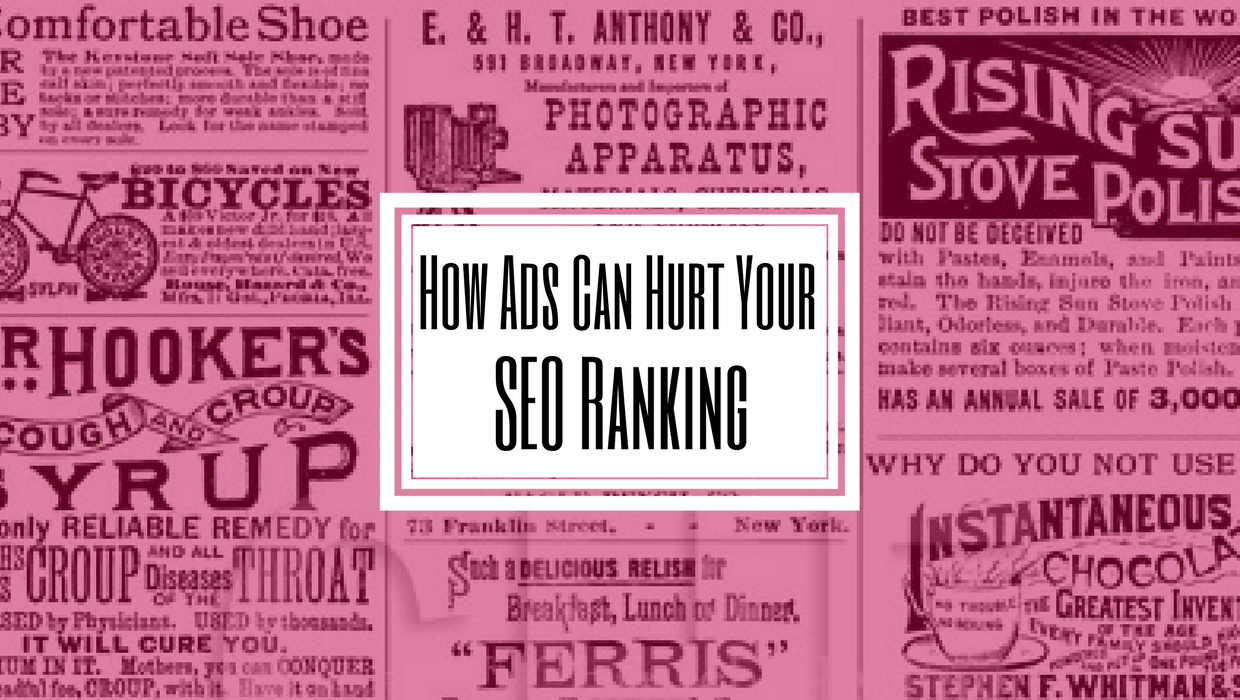 On-site ads are nothing new. In fact, they’re how a lot of companies maintain revenue. In many instances though, these ads ranged from annoyance to a hindrance for users. Not only were they intrusive, they often slowed down the site.

It’s not surprising then that Google has been taking steps to combat these issues. Over the past few years, auto-playGoogle has been making changes that impact SEO and ranking. Most of the time they don’t even announce it. All the notice that is given is a sudden dropping in ranking.

The most recent round of changes has targeted ads. They have started cracking down on pop-up ads and removing right side ads. These changes reflect Google’s new focus on user behavior and preferences. And as a user, I can say I’m happy there might be fewer ads.

For sites that rely on advertising to make money though, this poses a problem. Here are a few things to keep in mind on how ads can hurt your site’s SEO ranking.

Logically speaking, the more ads you have on the site the more money it makes. This is true in the short term, but long term you’ll see a decline. Why is that? Simply put, a lot of ads hurt a site. Not only will users not revisit, but ads slow down a site causing things like images and videos to load slowly.

Then there’s Google. Google takes into account things like user site engagement, how long a user spends on your site, and site speed. If all of these things are negatively impacted by tons of ads then it makes sense that Google would penalize your site for that too. So if you need ads on your site make sure there isn’t too many to become a hindrance.

Crawl Your Way To The Top

Google uses something called “spiders” to index websites. These creatures go through a site indexing every page so that when users search they get taken automatically to where they need to be. That’s why internal links are so important. They help spiders get to certain pages quickly.

Google has “crawl budgets” that determine how many resources they dedicate to indexing sites. There isn’t a hard and fast rule but what we do know is that ads slow down spiders. If a spider encounters too many obstacles (ads) it’s just going to move on. This ends up hurting your SEO ranking as fewer of your site’s pages are indexed in Google’s database.

Top Heavy Will Send You Toppling

Way back 2012 Google changed its algorithm to prevent top-heavy sites from ranking well. Even though this was 5 years ago, a surprising number of sites haven’t made the necessary changes. So what is a top-heavy site? Simply put, it’s a site that has more ads than original content. Page content should dominate the visual instead of advertising. Google tends to do an average for the site, but if you have a page that has more ads than content, consider revamping the layout to make it more balanced to lower your chances of being penalized.

Some ads are so irritating or frustrating to users that they have just started to avoid sites completely that they know have them. The worst offenders? -Ads with auto-play video, and disappearing auto-play. Pop-ups with the countdown until you can exit also rank high.

If you have any of these types of ads on your site remove them right away. You might say “but they work!” Even if you believe that’s true (and we highly doubt that) the negative feeling you are giving your users isn’t worth it.

*It’s not just advertising for this. Users strongly dislike any auto-playing, whether it has audio or not. News sites are particularly bad for these.

Digital advertising is facing a new challenge- ad blockers. The sad truth is that they only have themselves to blame. With burn rates, how quickly your site turns off users due to bad site practices, increasing so is the use of ad blockers. Ads (pop-ups, auto-play, and ad-centric design) are the biggest forces feeding the burn rate.

So what does this mean for you? Well, it means that not only are people not seeing the ads, they’re not clicking on them. Essentially you are weighing down your site, lowering its ranking, and not seeing a profit for it.

The good news is that this isn’t permanent. Take a hard look at your ad practices on your site. Ask family members and friends to review it and look at your Google rankings. Two-thirds of US consumers are willing to turn off ad blockers if ads become less annoying. So start doing that.

The Internet Advertising Bureau (IAB) lists a few steps to take to make your site more friendly to users.

Make sure you have an effective site ad strategy in place that doesn’t negatively impact your site, your SEO ranking, or your users. Contact us to find out how your site ranks.