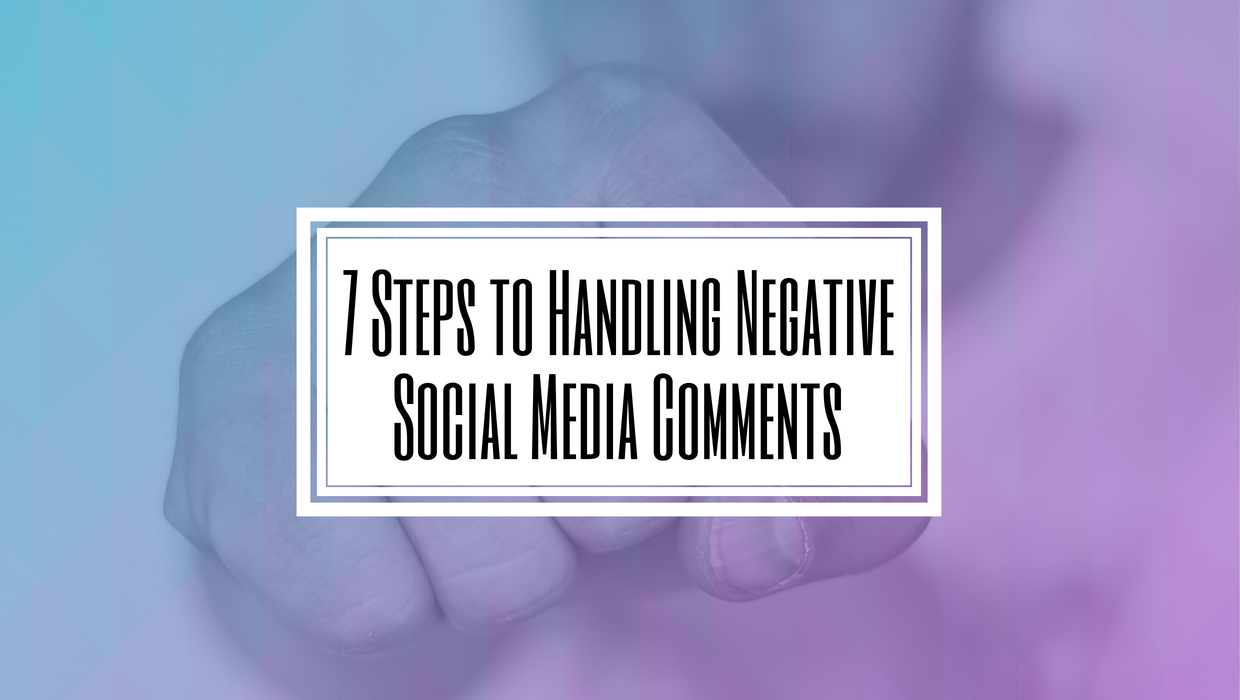 Getting a negative comment or feedback never feels good. With the rise of social media, brands now have to deal with these sorts of comments in ways they never had to before. Consumers trust online reviews, either left formally on places like Google Reviews and Yelp or informally in comment sections, as much as personal recommendations from family and friends. Negative comments aren’t a sign of bad business if they’re handled correctly. Navigating them can be tricky, especially with the rise of online trolls, but here are seven steps to help businesses manage them.

When you first read a negative comment, it can send you into a panic. Take the time to look past their language to understand the root of the issue. Is it a problem you can help them with? Read the comment a few times, and possibly even show it to others, so that you really understand what their problem is.

This is also the stage in which you should decide whether or not responding to them is the right move. Not every negative comment should be responded to. This is something you will have to use your judgment on and may want to get a second opinion on. Respond to comments that bring up a valid concern or issue. Even if you cannot help or remedy the problem, responding to them to let them know their concerns were heard. Troll or spam comments should be ignored, as engaging with them could make things worse.

It’s a good idea to have documentation of negative comments and interactions you have with them. Not only will this protect your company, they can also be used later on for training purposes. Take a quick screenshot of the comments and save any private messages.

It can be tempting to simply delete a negative comment and pretend it never happened. This is a mistake though. It’s important that businesses remain transparent and honest with their audience. Deleting messages and or blocking the users who posted them rather than addressing them head on signals to users that you have something to hide. Replying to a negative comment in a professional manner shows people that you’re accountable and authentic.

There are certain instances where deleting comments or blocking an individual is the right move though. Deleting troll comments left by bots or competitors is fine. Comments that use derogatory or vulgar language are also safe to delete. Use your judgment before deleting or blocking though.

Users expect a response in a timely manner when they reach out to you on social media. The longer it takes you to act on a negative review, the more time other users will see it without your response. Most social media users expect to see a response within an hour. It’s important that businesses have guidelines in place for dealing with negative comments quickly, so that responding doesn’t get bogged down by having to get sent up the chain of command.

We cannot stress enough how important it is to keep your cool. Remember, although social media is a more casual and personal platform anything said from the business account is a reflection of the brand. Draft your response before sending it, and have another person look it over. Remember to maintain good customer service at all times. How you respond will not only be judged by the original poster, but by all of your followers.

Now it’s finally time to respond. A response should include an apology and if possible a solution. A lot of times users know there isn’t a fix; they just want their concerns to be heard and validated. Be honest with your users in your response. If there was any fault on your side own up to it! Make sure to reread your final draft a few times before sending it. A good rule of thumb is that if you wouldn’t say it to a customer’s face, you shouldn’t say it in a comment.

A big decision a brand has to make when responding is determining when to respond to the comment and when to reach out in a private message. If the issue is urgent, sensitive, or requires a lengthy response it might be better to reach out privately. In those instances, respond to the original comment by asking them to reach out in a direct message (DM). This lets other followers know you’ve seen the original posters problem and are working on it, even if it’s not playing out for them to see.

Continue to monitor all of your posts for future comments or concerns. It might seem overwhelming to deal with, but most users only resort to getting help on social media if more formal customer service channels have failed. Usually, a response will remedy the situation, but there will be instances where any response just adds fuel to the fire. It’s important to learn when to disengage. Maybe the poster was an online troll you didn’t initially notice or maybe they just want to argue, not fix a problem. Stepping away is sometimes the best thing to do.

If you need any help with social media management or want to learn more feel free to contact us! We look forward to hearing from you.