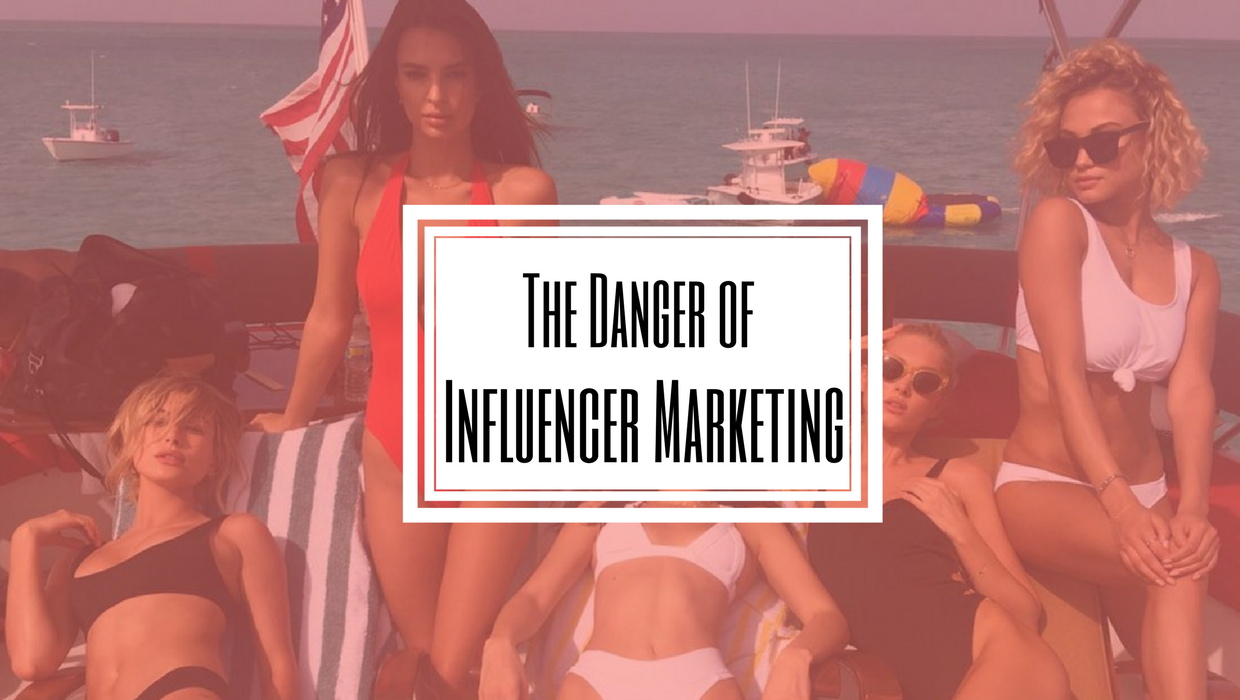 It’s nearly impossible to talk about digital marketing today without having someone mention “influencers”. So what are influencers? Put simply, they’re people who have cultivated a social media presence. They have followers in the thousands, sometimes even millions. Their pictures, videos, and tweets get liked, shared, and commented on.

In many instances, these influencers are celebrities both on and off their social media accounts. They’re singers like Selena Gomez, models like Gigi Hadid, actors like Dwayne Johnson, or personality celebrities like the Kardashian/Jenner clan.

But not all influencers are big name celebrities. Labeled “Instagram models” these people have cultivated thousands of followers by posting pictures of their lives. Whether it’s them brunching, them on vacation, or them doing their makeup these people get serious views. Some are beauty bloggers, some one-time reality TV personalities, and some are just extremely attractive or wealthy.

No matter where their fame comes from these people have one thing in common- people listen to them. They’re called influencers for a reason. The clothes they wear, the products they use, and the places they go get instant promotion.

This promotion isn’t always free either.

Sugar bear hair vitamins, Flat Tummy Tea, waist trainers, strapless push-up bras and more. These are the lifeblood of social media influencers. For many of these people paid sponsored posts are what pays their bills. Being an influencer is their full-time job. Even celebrities who jump on these sponsored posts. It’s easy money for them. The Kardashian/Jenner’s get paid 6 figures for just an Instagram post or tweet. 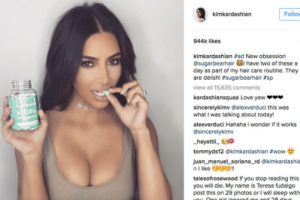 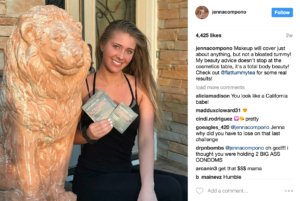 Advertising is constantly going through evolutions. Celebrities and advertising have especially gone through many changes. There were times in which celebrities didn’t even touch ads because it looked so bad. Money was quick to change that.

There’s always been both risk and reward with celebrity endorsements. It relies on mutual trust between brands and people. If a company does something bad, a celebrity who appeared in their latest campaign may also be tarnished. And if a celebrity does something wrong the brand that sponsors them is at risk. Brands and celebrities end relationships all the time due to scandal (remember when Tiger Woods lost his huge Nike sponsorship?)

There was a degree of separation in traditional celebrity advertising though. At the end of the day consumers, celebrities, and companies all knew it was a business deal. Sure, it could look bad if it went sideways but the risk wasn’t that high. With influencer advertising that shifts completely.

A sponsored product post on a personal social media account feels much more intimate. It feels much more authentic to see a Flat Tummy Tea post when it’s nestled between pictures of Kylie Jenner in her Lamborghini and a selfie than it would if it were on a billboard on a highway.

This intimacy and authenticity have started to pose problems. It has become increasingly difficult for consumers to tell what is an ad and what’s a celebrity’s personal recommendation. This gray zone has been growing so much so that government regulations have been implemented to combat this problem.

In the United States, the Federal Trade Commission requires that all paid or sponsored posts be marked. This is for both monetary payment and free items. Influencers have taken to marking their posts with #ad, #sp, or #sponsored. But not all of them do. The FTC has been slow to enforce this new rule, which has allowed influencers to leave the legally required labels off. 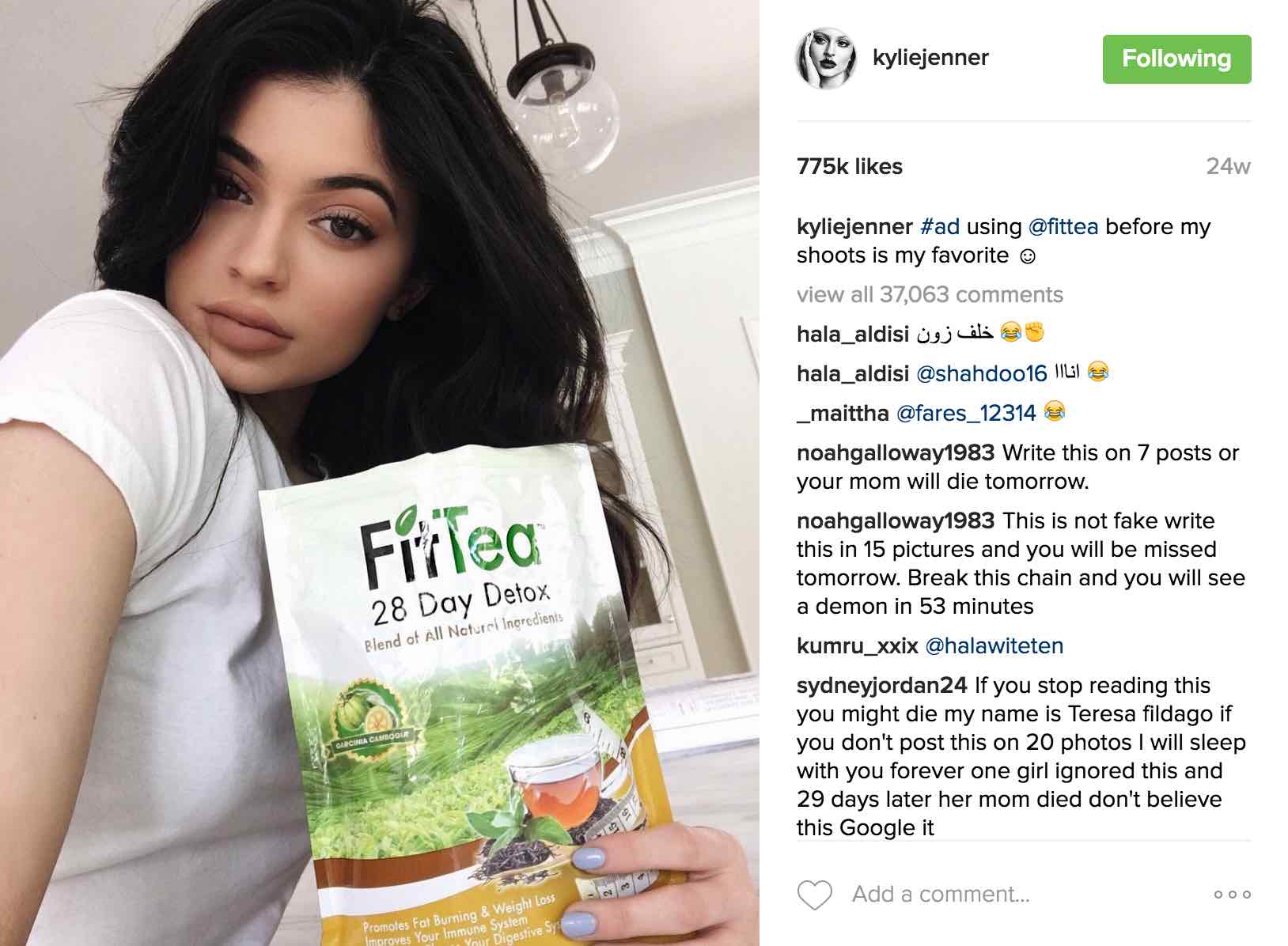 Consumers and users have become savvier though. It has become easier to spot which posts are ads and which products are paid promotions. Still, people are buying into it.

The Fyre Festival debacle is proof of that. If you haven’t heard about Fyre Festival do a quick Google search and you’ll get the gist. The long story short is that influencers heavily marketed a luxury music festival in the Bahamas only when guests arrived it was more comparable to a refugee camp. Only a few saw it coming but their words of warning were drowned out in the sea of influencer promotions.

People were quick to point the finger at hosts Ja Rule and tech entrepreneur Bill McFarland. As the days passed though people began taking a harder look at the influencers that sold them this pipe dream.

The event hit media and took it by storm when a group of models vacationed together in the Bahamas. Top models like Bella Hadid, Emily Ratajkowski, Hailey Baldwin, Elsa Hosk, and Rose Bertram (as well as others) posted dozens of pictures of themselves looking sun kissed and beautiful. In addition to all of these pictures look fabulous, they were also marked with #fyrefestival. 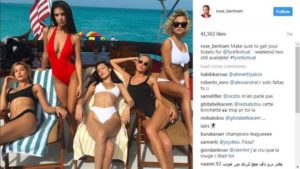 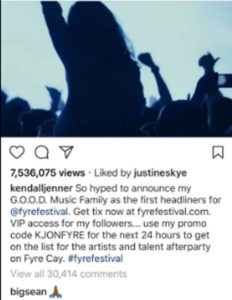 The influencer marketing only took off from there. Kendall Jenner was supposedly paid $250,000 for a promotional post announcing a musical headliner. The leaked business pitch McFarland used to get investors labeled these influencers “fyre starters” (no, seriously that’s what he called them). These “Fyre starters” were the cornerstone of this entire festival. In fact, they sold it to consumers before there was even anything to sell.

The problem was that only Emily Ratajkowski ever put #ad alongside these promotional posts. Hundreds of influencers were given free tickets, or thousands of dollars depending on their follower base, to post about this event. Consumers bought into it, purchasing tickets for hundreds or even thousands of dollars. The price was worth it. After all, rubbing elbows with Victoria Secret models at a luxury, tropical getaway is priceless.

So what happened when the Fyre Festival went up in flames? The posts disappeared. Kendall Jenner has since deleted her posts. Other influencers have reportedly done the same. Only Bella Hadid has released an apology (albeit not a sincere one, and it has since been deleted). Reports claim top influencers like Jenner and Hadid were told not to come ahead of time while lower influencers that only received free tickets were evacuated first and instructed to delete their posts.

Since the disaster that is Fyre Festival two lawsuits for $100 million each have popped up. More are expected to follow. One lawsuit specifically calls out these influencers. And are they right to blame them? One lawsuit alleges, “Social media ‘influencers’ made no attempt to disclose to consumers that they were being compensated for promoting the Fyre Festival.”

Twitter was alight with jokes about stranded rich millennials who were stupidly duped by these influencers. The jokes were funny but the reality is that people could have been seriously hurt or killed. And the influencers that advertised for the event were a big reason as to why those people were there.

These influencers blindly took money, or gifts, in exchange for selling their credibility. They essentially duped their follower base, something that many might find hard to forgive. Sure they will retain those followers, but will they retain their trust? The fact that influencers didn’t put the FTC required markings of a sponsored post opens them up to legal consequences.

Has influencer marketing already blown up?

If anything Fyre Festival has proven just how powerful it can be. But as they say, with power comes responsibility. While there will likely be no legal repercussions for these influencers this will hopefully be a wake-up call. Doing due diligence on brands and products they promote on their social media accounts is the smart move.

Kendall Jenner, in particular, has started to feel the effects of negligent promotions. After her disastrous Pepsi commercial, then her ties to Fyre Festival, and now a Vogue India scandal this young model and influencer has received wave after wave of backlash.

The Fyre Festival should be a warning to everyone in the digital marketing industry, both brands and influencers alike. Influencer advertising has power but it needs to be wielded correctly. Influencer marketing hasn’t died yet, but perhaps it’s time that it was finally controlled.