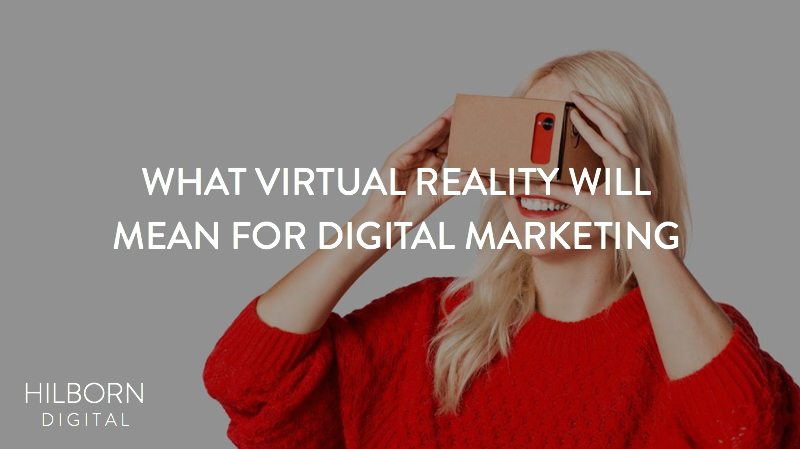 It’s still early days, but virtual reality is quickly gaining mainstream attention. Global search interest on Google grew by nearly 4X in the last year. What will a future with virtual reality mean for advertisers, creators, and storytellers?

Virtual reality used to be the stuff of science fiction. Today, it’s become a true reality. Why now? For one, the ubiquity and quality of mobile devices. With a simple piece of cardboard, we can now turn our smartphones into virtual reality headsets. Google has shipped millions of Google Cardboard viewers to help bring the VR experience to everyone. And, viewer in hand, there’s no shortage of content to watch. Every single video on YouTube can be viewed in VR, making it the world’s largest library of VR content.

This is giving many people all over the world their first taste of VR, and mainstream interest is growing; global search interest for virtual reality on Google has grown by nearly 4X in the last year.

The technology has the potential to change our daily lives—from how we communicate to how we spend our leisure time. It’s early days, but it’s already happening, and now is the time for brands and creators to understand what it all means.

The promise of VR

The film used to be the most immersive storytelling medium. But even with the best, highest-resolution TVs, you’re still just watching. You’re not there. The promise of VR is what the industry calls “presence”—the feeling that you’re really somewhere else. VR cameras like Jump can capture the entire experience of a place—every corner, every angle. In the not-so-distant future, cameras like these will be capturing experiences all over the world. What does this mean for audiences? How about access to the best seats in the house at any event—floor seats at the NBA playoffs, a box at La Scala, front row at the Beyoncé show? Or the chance to visit the most beautiful places on earth, from the comfort of home? It’s the closest thing we have to teleportation, enabling deeper engagement than has ever been possible.

VR can also create a time machine of sorts. If we start recording the most interesting things that happen this year, then 20 years from now, we’ll be able to go back and experience it like we were there. These could be major global events or personal moments—a birthday party, a wedding, the first day of school. We’ll collect these memories like we do photographs—able to relay or relive them in an intensely vivid way.

YouTube was one of the first websites to make an early bet on 360-degree video. This means viewers can see the video from every angle just by swiping or moving the phone or tablet around—no headset required. Uploads of 360-degree videos continue to grow and have doubled over the past three months. Brands are forging the way, using 360-degree video to film big events or get creative with ads. BMW used this technology for an ad featuring a 360-degree car race. The “School of Rock” musical created a 360-degree music video. AT&T simulated a car crash to drive home its phone safety message.

Virtual reality takes the 360-degree video experience a step further by adding depth. When viewed with a VR headset—not far from those red View-Masters you might have used as a kid—images become three-dimensional, which adds to the feeling of immersiveness. On top of that, spatial audio lets people listen to audio from all directions, just as in the real world.

The story is everywhere

For content creators, the potential of 360-degree video and VR is immense, but it’ll require a shift in thinking. VR lets viewers be active participants; they can look wherever they want. As Google’s principal VR filmmaker Jessica Brillhart puts it, the story is everywhere. So, rather than telling a story frame by frame, filmmakers need to build entire worlds.

This makes VR and 360-degree video an incredibly powerful tool to create empathy. When a viewer feels like they are there, they have a greater sense of the situation. Messages become more impactful.

On YouTube, creators are using the medium to create truly transportive experiences across sports, news, education, and fashion. Viewers can feel that tickle in their stomach when sitting in the cockpit of a jet in an acrobatic air squadron. Virtual field trips let teachers take students places a school bus can’t. Fashionistas can get a front row seat at the latest runway shows from Jason Wu, Hugo Boss, and Dior.

How will you tell your story?

With the latest in innovation for 360* video and photography, our team has the technology and experience to bring your brand to life. Contact us to see how we can collaborate on your vision.